I paid my first visit of the soaring season to Minden, NV on Saturday, May 30, 2009. I flew with Devin Bargainnier of SoaringNV in the Shempp-Hirth Duo Discus X. Devin is a 21 year old gliding phenom! He has an incredible wealth of soaring experience and knowledge. Heck, at 21 I hadn't even seen a glider and he already has four times as much glider flying time as I have now (and at least 18 times the knowledge)! He is scheduled to fly in the World competitions to be held in Finland in a few weeks as a member of the U.S. Junior team! Good luck to you Devin!

What a great day it was, and it started early. A low pressure system was bringing moisture up from the South and thunderstorms were forecast for later in the day. We had a great flight, my longest in duration (4.25 hours) and distance (300 statute miles) to date.

Here is the ship as we prepare to tow it to the flight line and you can see that the CUs are already well developed on the Sierras at 11:30 PDT. 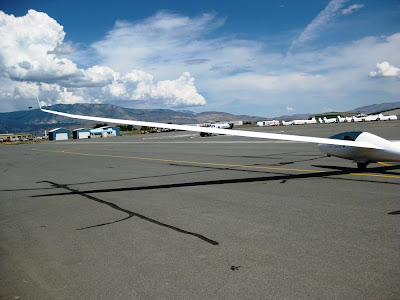 We towed to the Kingsbury Grade of the Sierras and climbed to 11,000 MSL after release. Then we headed South to the area of Freel Peak and Job's Peaks where we experienced some near-terrain flying, a.k.a. "rock polishing". 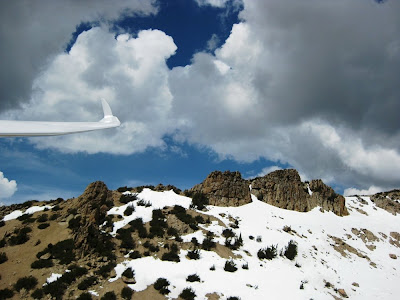 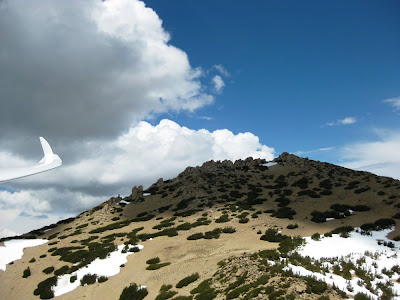 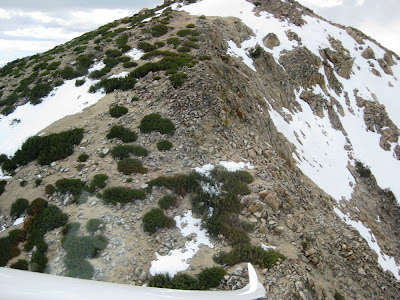 We decided that the route to the South was already overdeveloping and chose to head North instead. Here, we are passing the Freel Peak (left wingtip) to Job's Sister saddle. 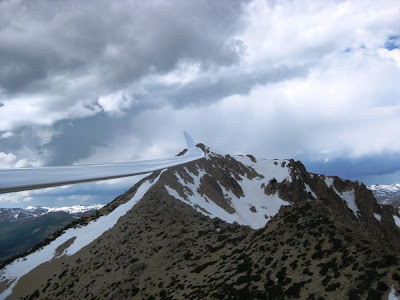 This is the South end of Lake Tahoe. 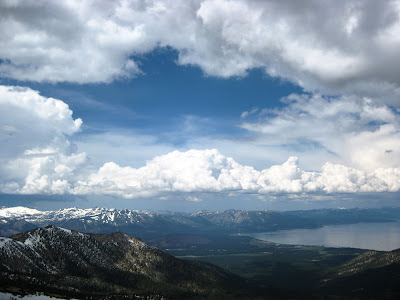 This tiny Alpine lake is named Star Lake and is about 5 miles South of the Heavenly Valley ski resort. It is only accessible by hiking in. 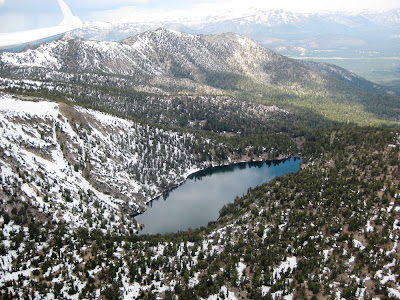 Here we are approaching the North end of Lake Tahoe. The lighting conditions made the deep blue hues of the lake really prominent. 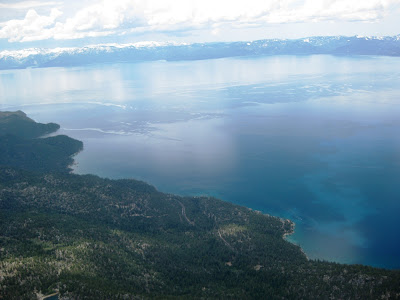 The thunderstorm in the distance had already developed the classic anvil head and was dumping rain. Devin asked me how high I thought the top of the cloud went. My guess was 30,000 MSL. His guess was 40,000 MSL. He was probably right. Who am I to second guess a 21 year old with tons more experience than I? 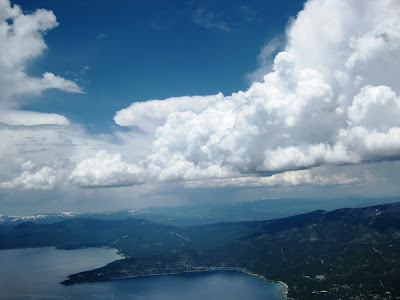 This is the North shore of Lake Tahoe and again the deep blue is breathtaking! 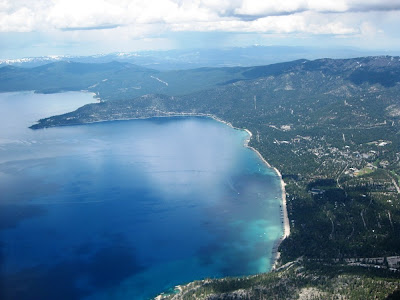 We continued North to the West of Reno (the farthest North I had been). You can even see the Reno-Tahoe International airport. 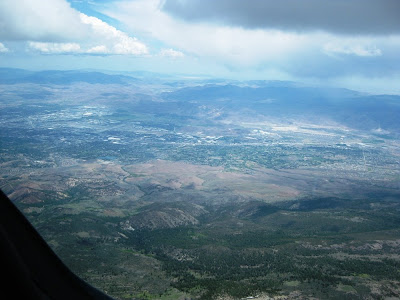 We went a little farther North and then turned around and returned to Mt Rose. From there we crossed over Washoe Lake and onto the Virginia mountain range North of Carson City. 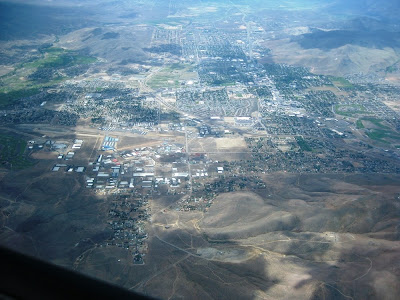 After that, we tip-toed our way onto the Pinenut range and headed South to the South end of the Carson Valley and departed to the Antelope Valley. Conditions were rapidly over developing to the West. Devin noted the interesting cloud on the mountain top that was below the cloud line. The whole scene appeared as though it was underwater (which it kind of was!). 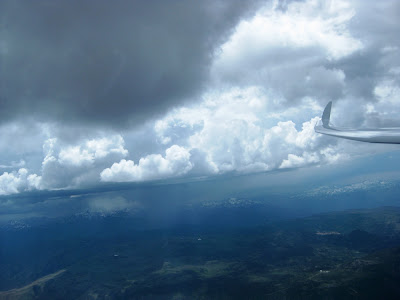 This is the same shot taken a few seconds later. The lighting conditions had changed and made for a different perspective. I couldn't decide which I liked better, so I posted them both. 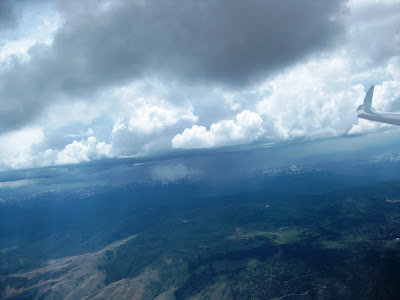 Mt. Patterson was already obscured by rain, so we decided to go East to Mt. Grant instead. Looking East you can see that once past the gray cloud we were under, it had not yet overdeveloped. 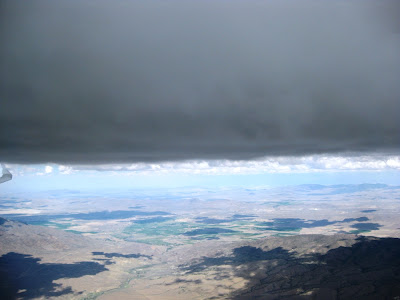 This is looking to the South end of the Antelope Valley. You can see the Walker River entering the valley and meandering along the base of the Sierras to the West. The small towns of Coleville and Walker are also visible. 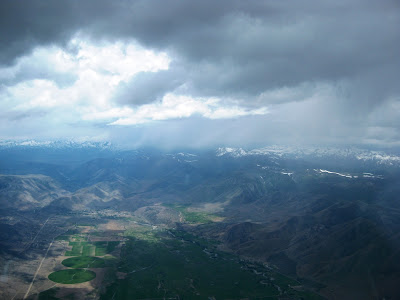 As we progressed to Mt Grant, we went past Barron Hilton's ranch and airfield. It is where Steve Fossett departed from on his ill-fated flight. 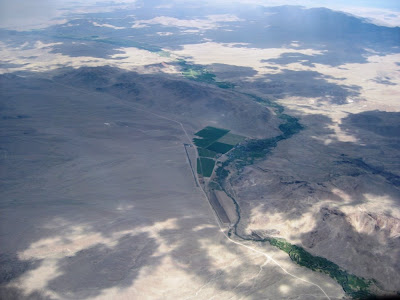 After turning Mt. Grant, we headed back to Minden. By now there were thunderstorms and lightning along the entire length of the Pinenuts. So we entered the Carson the Valley on the West. This is Heenan Lake. It is a brood stock lake for the endangered Lahontan Cutthroat trout. It is only open to fishing four or five weekends a year beginning in September. And even then, it is a catch and release lake only. 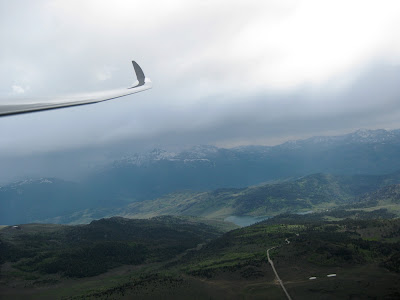 We passed through some pretty heavy rain as we entered the Carson Valley. Here we are entering the valley at about 7,700 MSL and the airport is still seven miles to the North. It is the lowest I had ever been over this area. 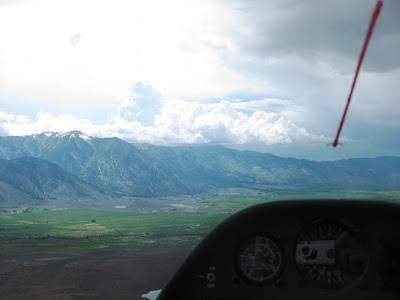 This is the Carson river as it enters the valley. The rain can be seen over the Pinenuts to the East. 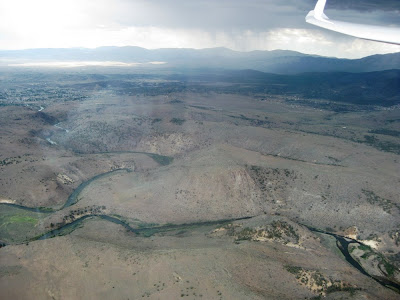 We were considering our landing options when we found the last thermal we needed to get back. When we arrived back at the Minden-Tahoe airport, the winds were 270 at 20 knots gusting to 26! It made for an "interesting" landing.
All in all, this was a fantastic experience and I look forward to flying with Devin again this season!
Posted by Duo Discus Driver at 7:36 PM