I paid my second visit of the soaring season to Minden, NV on Friday, June 19, 2009. I flew with Gabe Bourbeau of SoaringNV in the Shempp-Hirth Duo Discus X. Gabe is a retired employee of the state of Missouri were he served as a pilot for the Governor.

Gabe and I had an interesting and unique task. We were to go out and have a cross-country flight to the South which would end with a landing at Barron Hilton's ranch (Barron is the son of hotel magnate Conrad Hilton and the paternal grandfather of Paris Hilton). The reason for this was that the glider we were flying was being rented by the Hilton Ranch for the final Barron Hilton Cup Invitational beginning the next day.

The Barron Hilton Cup Invitational recognizes glider pilots from around the world who have submitted the best glider flights in the previous two years. The winners of the Barron Hilton Cup are afforded an all expense paid week of flying at Barron Hilton's Flying M ranch. There, they have their choice of flying all types of aircraft, from modern state-of-the-art gliders to conventional modern and historic power planes, helicopters, and even balloons. In addition to the winners of the Barron Hilton Cup, in years past the elite of the elite have been invited to participate. Including the likes of astronauts Alan Shepard and Gene Cernan, entertainer John Denver, and avitation great Chuck Yeager. As I mentioned in my first post below, this is also where adventurer Steve Fossett took off from on his ill-fated flight.

We got a bit of a late start, but we worked our way onto the the Pineneut Range and made our way to the South of the Smith Valley. There, we found a booming thermal (for the soaring audience, the averager showed above 11 knots for quite some time and even reached a peak of 11.9 knots!) which enabled us to get onto the Mount Grant range. Here we are looking at the North end of Walker Lake, just North of Hawthorne, NV. 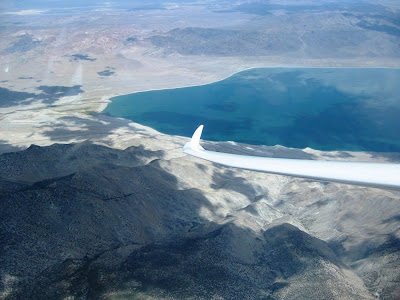 This is the South end of the Walker Lake and the town of Hawthorne. Hawthorne was the largest munitions storage area in the country during World War II. 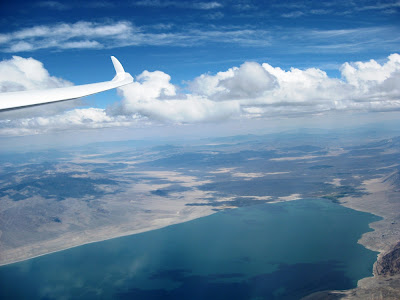 Since we had the Hilton Ranch easily made, we decided to head to the Southwest towards Mono Lake. We progressed to the dark cloud in the distance and then decided to return to the ranch. 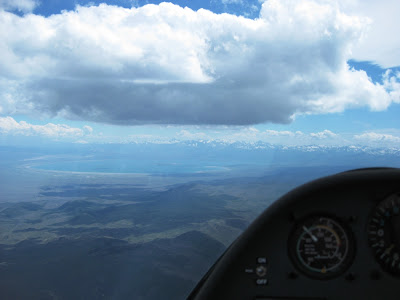 Here is the Hilton Ranch from the vicinity of Mount Grant as we decided to go in and land. 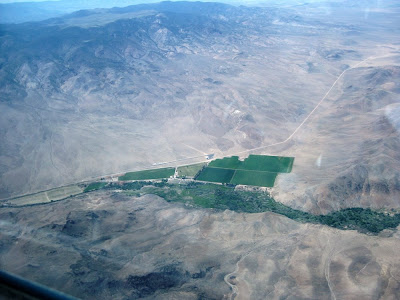 Shortly after we landed and secured the glider, one of the visiting pilots began inspecting and preparing the glider for a late afternoon flight. He was the guest of the Austrian winner of the Hilton Cup. 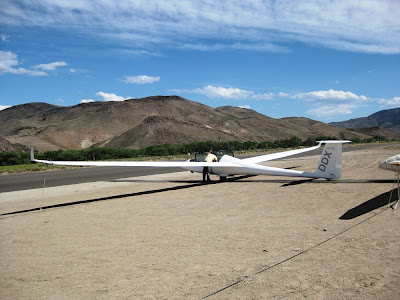 Here is the Austrian winner preparing to join his guest. The "Hospitality Tent" is behind him. There, the pilots were afforded an unlimited supply of drinks and food from water and soda, to sandwiches, fruit, and pastries. 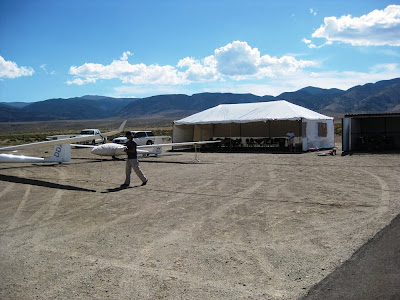 Next to the Hospitality Tent there are four custom glider hangers. At the end of the hangers you can see the famous antique Flying M fire truck which is used to fill the gliders with water ballast. Unfortunately, I did not notice this until I downloaded the photos several days later. Otherwise, I would have made sure to get some close-up photos of it. Definitely a case of not seeing the trees for the forest! Exactly the opposite of the old saying! 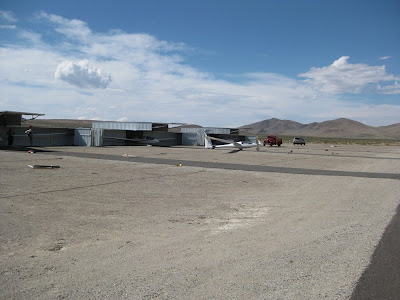 This is looking up to Mount Grant from the Flying M airstrip. 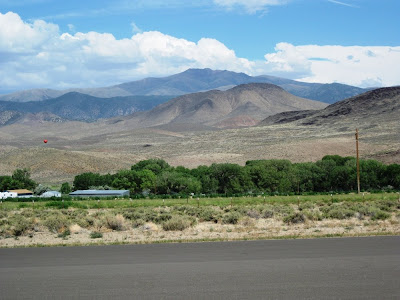 And this is the Hilton Ranch with many motorhomes parked onsite. Unfortunately, this is as close as I got to the ranch. 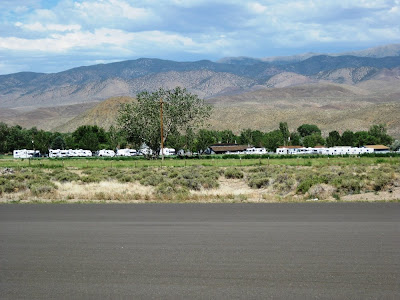 Here, the Austrian pilots are making their final preparations before taking off in the glider that Gabe and I delivered. 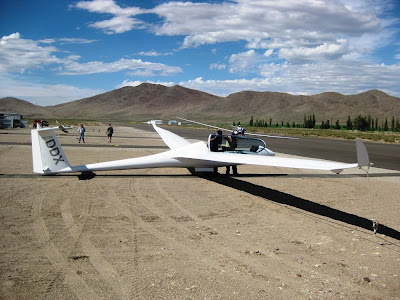 Another Duo Discus arrived at the ranch. This is a Duo Discus XL, the latest version of the Duo Discus. 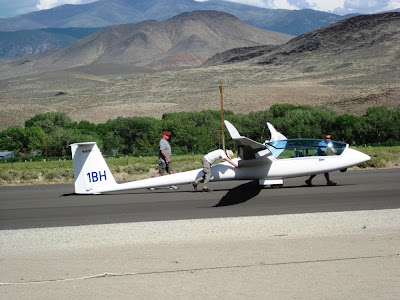 Much too soon, it was time for us to go. Dennis Ivans, a Hilton Ranch pilot, would be flying us back to Minden in a Cessna 185 Skywagon. Here, we are about to take off. 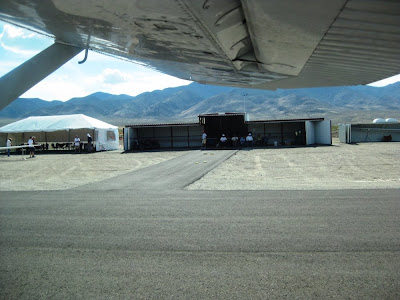 This is the Pine Grove mountain range. The dirt roads below lead to the ghost town of Pine Grove which was a gold and silver mining town in the mid-to-late 1800's and early 1900's. 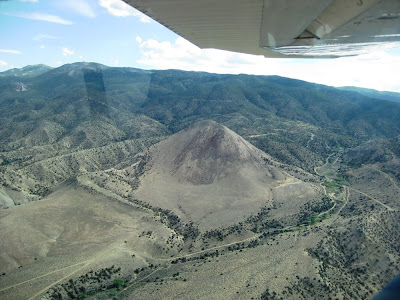 This is the East Fork of the Walker River as it exits the Smith Valley and makes its way towards Yerrington and eventually, Walker Lake. 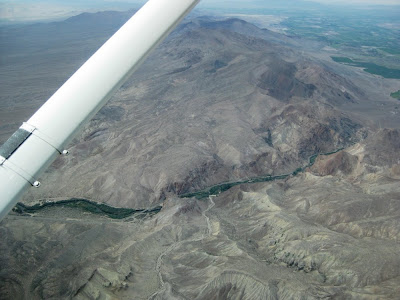 This is the Rosaschi Dusters airstrip in the Smith Valley. It is a good land-out site for glider pilots who find that they don't have enough altitude to get back over the Pinenuts to return to Minden. 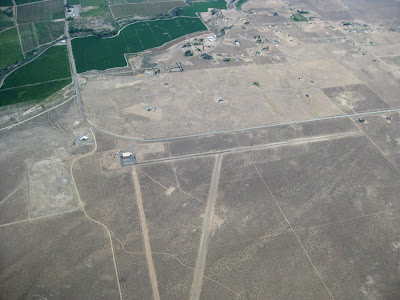 I noticed that the Pilot's Operating Handbook for the Cesnna 185 was in the seatback pocket in front of me. Gabe held it for me to take a photo, but the flight was quite turbulent and thus the photo is out of focus. 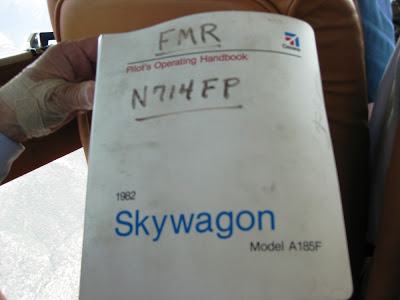 Here, we are on final appraoach for Runway 30 at Minden. 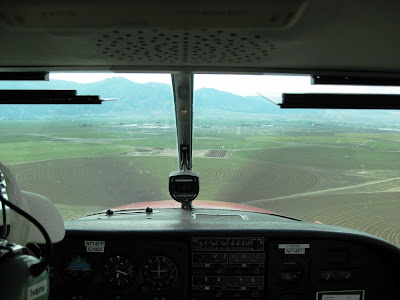 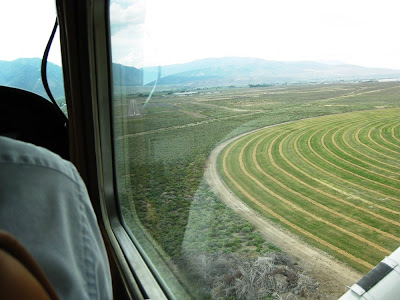 Back home again! This is Gabe exiting the plane. 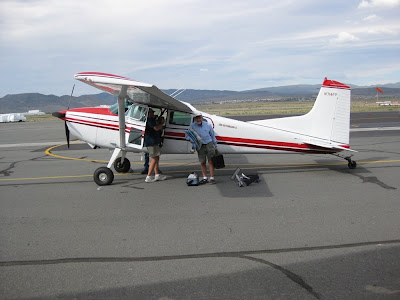 What a wonderful, once in a lifetime experience this was! A special thank you to Gabe, and SoaringNV for making it possible for me!
Posted by Duo Discus Driver at 9:55 PM