I paid my third visit of the 2011 soaring season to Minden, NV and flew on Saturday, September 10, 2011 with Rick Walters, a widely known soaring competition pilot. We flew together in SoaringNV's Schempp-Hirth Duo Discus X.
The forecast was for a fantastic day of soaring, and the day delivered! We originally planned to fly all the way around Lake Tahoe (which is rarely viable) but the day over developed early and the entire west shore of the lake was under thunderstorms by the time we arrived on top of the Sierras to the east of the lake. After spending an hour trying to make the original plan work, we decided to fly to the north. As the flight progressed, we kept setting our goal farther and farther north as the day was exceptionally good. Little did we know that we would end up flying all the way to Mt. Lassen...... and almost back to Minden!
These photos show the over development to the northwest and the west of us, respectively, when we were north of Truckee and our goal was to fly to Susanville, CA. 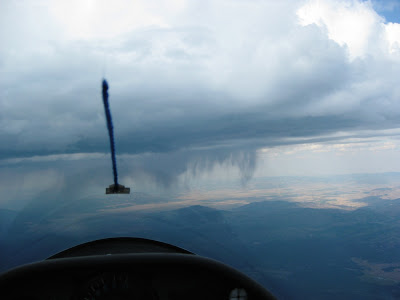 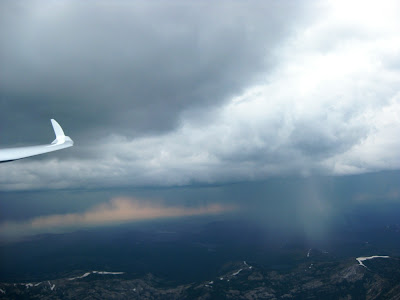 The lift line that we were in favored a more westerly route which took us on a heading to Lake Almanor and we revised our goal to the town of Chester on the northwest corner of the lake.  Here we are just to the south of Lake Almanor. 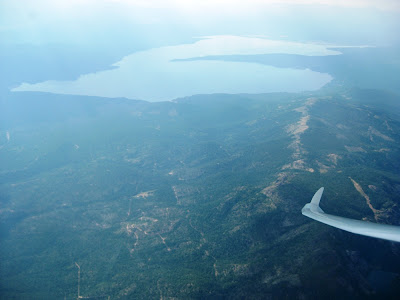 This is the town of Chester. The Chester airport is plainly evident in the photo. 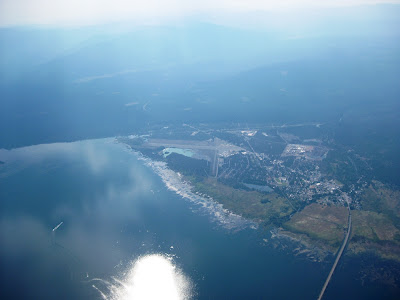 Even before we arrived at Chester, we could clearly see that Mt. Lassen was well within reach even though it was almost another 20 miles to the northwest of us and we would have to cross a big blue hole to get to the next gas station. We decided to go for it!

This is Horseshoe Lake. Its symmetry caught my eye and reminded me of one of those Rorschach inkblot images! If you look closely, you can see streaks of ice/snow/hail (some form of frozen water) going by. It always amazes me when you're sitting in an enclosed cockpit and the stuff still finds someway to get in! I could feel it hitting my legs. 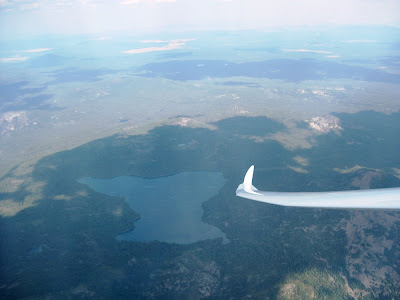 We arrived at the Mt. Lassen gas station after a seemingly endless period of flying through heavy sink and filled up before making our final assault on the mountain. 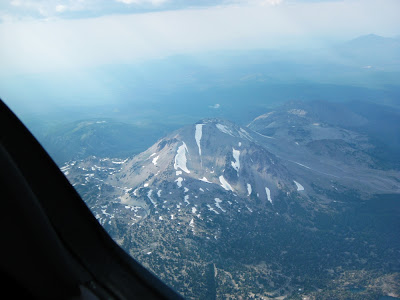 We circled the summit several times as the mountain itself was putting more gas in the tank than it was taking out. In the photos that follow you can see the lava field that flows from the summit, the switchback hiking path that hikers follow to the top, and the parking lot at the trail head. 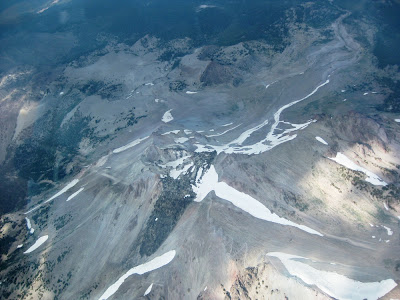 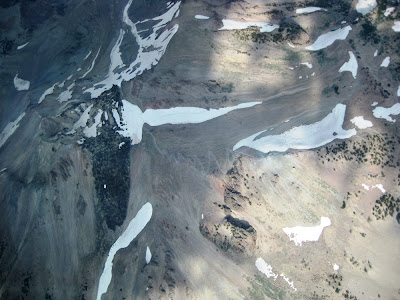 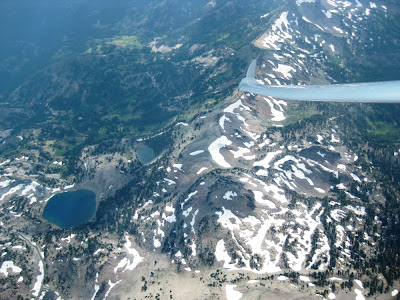 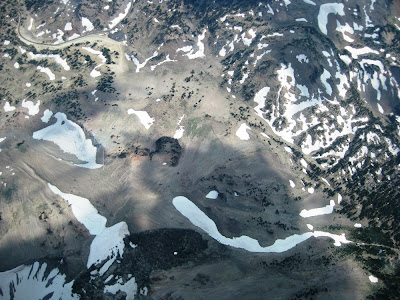 We bid Mt. Lassen adieu and began our return journey to Minden. Here we are passing the peninsula of Lake Almanor. At this point it seemed that we were going to have plenty of lift to get us back home. 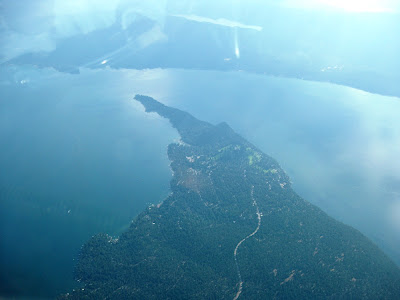 Here we are passing Honey Lake. Or, more appropriately, what's left of it as evaporation in the summer reduces it mostly to an alkali flat. 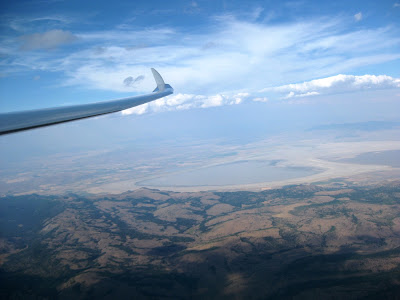 It was shortly after leaving Honey Lake that we looked down the road and we could see the gas station attendant holding a sign that was reminiscent of the 1970's gas shortage days "Sorry, out of gas"! We realized that we needed to divert our course out to the east to a mountain simply known as 7990 (so named for its altitude on the sectional map!).

Fortunately for us, 7990 was still pumping gas and we filled up as much as we could before continuing on our new, more southeasterly, heading which took us to the vicinity of Air Sailing Gliderport which can be seen in this photo. Pyramid Lake is to the east of the gliderport, on the other side of the Virginia Mountain Range. 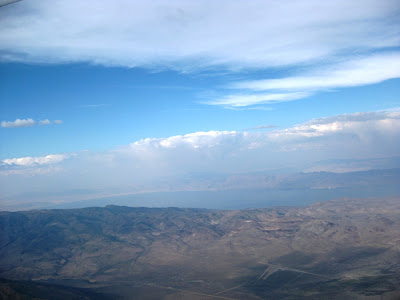 We stayed in the vicinity of Air Sailing in a weak thermal as we contemplated our next move. Continue on into the unknown, or go land at Air Sailing? Tough call, as we knew they were having a barbecue at Air Sailing that night!

Ultimately we decided to try to get back to Minden. Here we are passing to the east of Reno/Tahoe International Airport. Rick had contacted them over the radio and informed them that we might have to overfly their airspace. We had been listening to them reporting our position and altitude to the arriving and departing airliners. 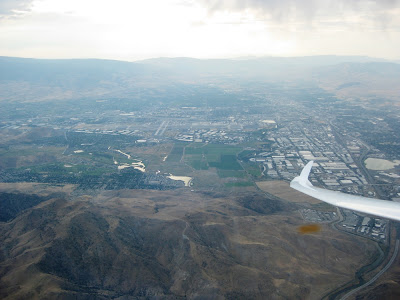 In the end, we stayed to the east of the airport and hoped for one more thermal as we continued south toward Minden. One more thermal, just a splash of gas, and we would be home free! But could we find it? No.

We crossed the Virginia Mountains and flew right over Virginia City as we headed to Carson City. The "V" in this photo is right above Virginia City. 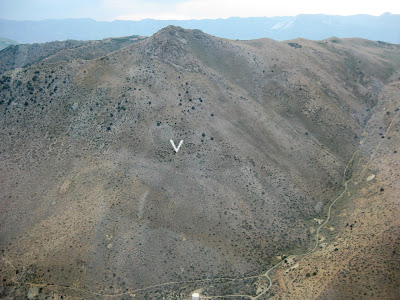 Once we arrived at Carson City, Rick demonstrated the resilience of a great competition pilot and continued to search for that one last elusive thermal that would get us home. To no avail however, and we landed at Carson City. We only had to wait about 15 minutes before the tow plane arrived to tow us back to Minden.

Those of you who have been following this blog know that the flights I have written about here were primarily flights to the south of Minden. Going that far to the north was a brand new experience for me. The flight lasted 5.6 hours and we covered about 350 miles.

My thanks go out to Rick and SoaringNV for another fantastic soaring experience!
Posted by Duo Discus Driver at 9:14 PM