I paid my second visit of the 2011 soaring season to Minden, NV and flew on Saturday, July 16, 2011 with Devin Bargainnier of SoaringNV in their Schempp-Hirth Duo Discus X.

I made this trip with a heavy heart as my Dad, Richard, had just passed away on July 3. It was somewhat of an untimely death (are they ever timely?), but not completely unexpected as Dad's health was in decline. In fact, my parents were in the process of moving to a lower elevation because of Dad's health when he died. So, after spending two weeks at Mom's house getting affairs in order, things were finally stable enough that I took a much needed break and went to do what I know Dad would have wanted me to do.

We had hoped to fly to Mt. Whitney on this day, but the day was not strong enough and we got a relatively late start. So instead, we flew to the south and made it a little past the Mammoth Mountain Ski Area.

Once we arrived, we could see that the lift line extended a little west into the Sierras. So we took this opportunity for a little sight seeing excursion. We knew that we wouldn't have much opportunity for extended dances in the Sierras as the lift markers were few and scatterd. In addition, the cloud bases weren't much higher than the mountain peaks. But we made two runs into the Sierra's separated by a return trip to the "gas station" to fill-up again before the second run. I have named these "Richard's Runs" in honor of my Dad.

I will dispense with my usual diatribe and let the photos tell the story of Richard's Runs. I'll just say to pay particular attention to the high-speed, low pass over the frozen lake with the turquoise blue shoreline. Enjoy, I know he did! 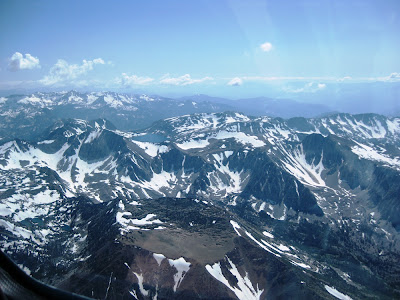 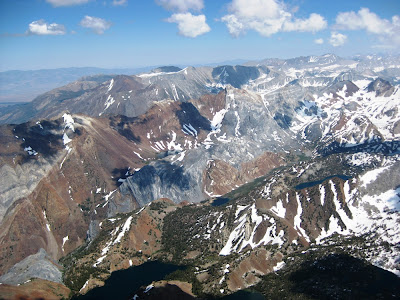 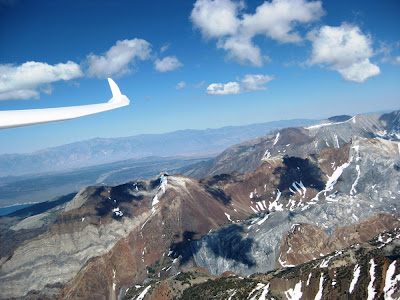 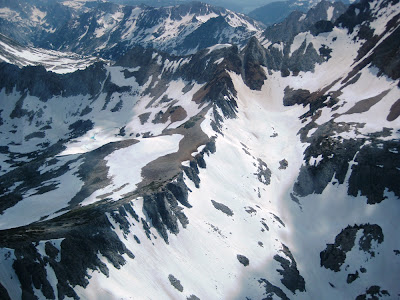 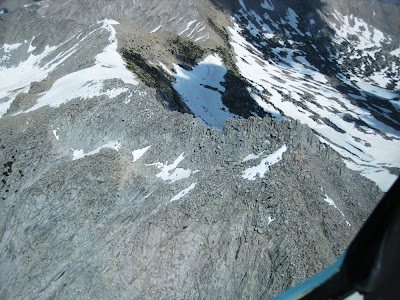 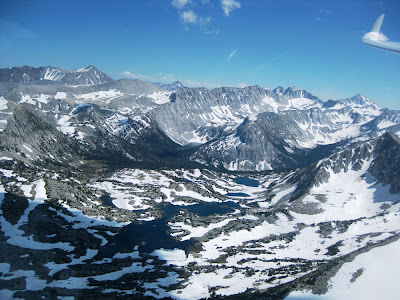 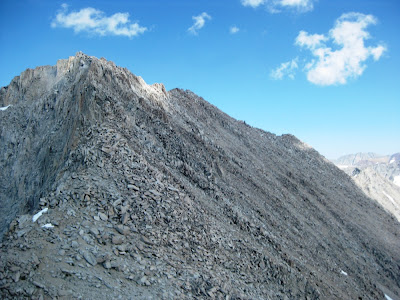 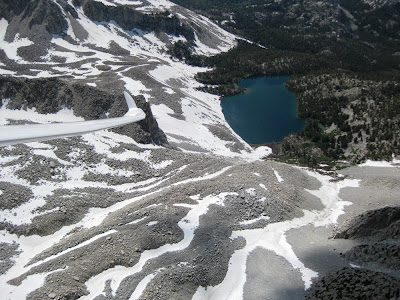 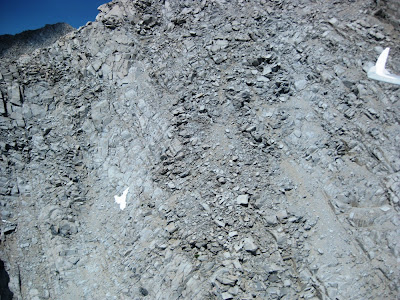 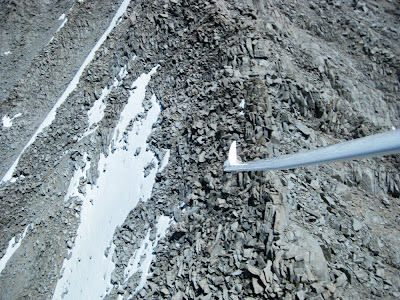 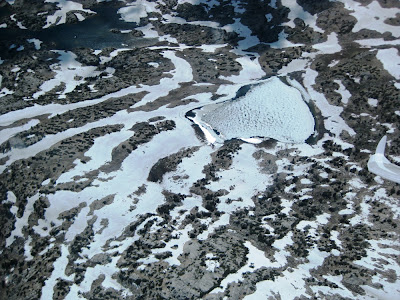 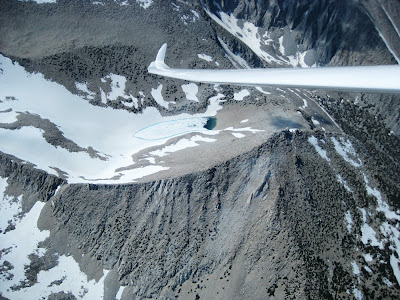 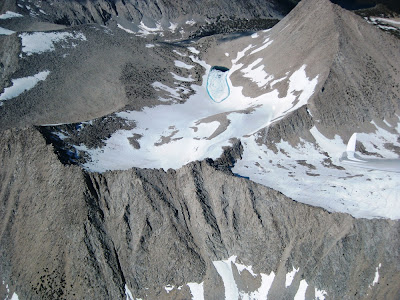 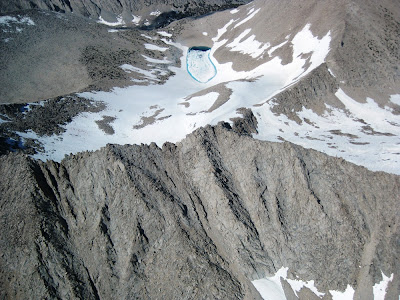 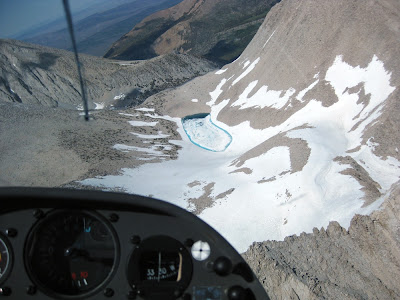 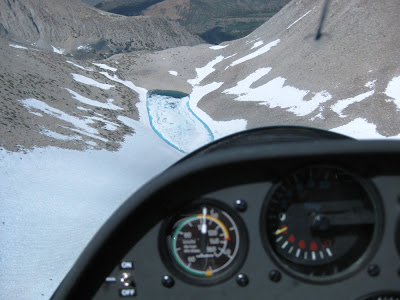 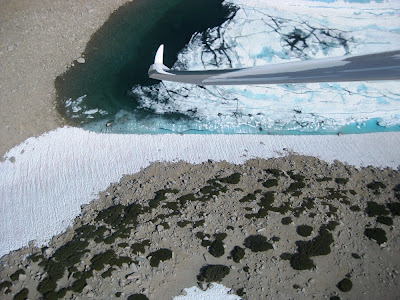 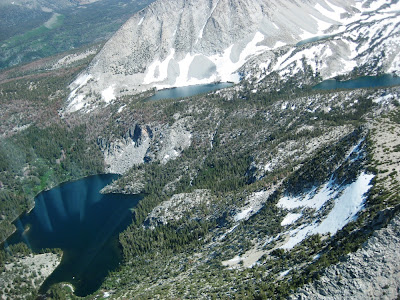 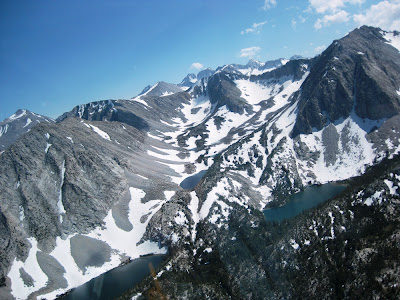 All too soon, Richard's Runs came to an end as we knew we would have to start back to Minden while the "gas stations" were still open. Here we are filling up at the Mammoth Lakes gas station right by the airport and Lake Crowley before beginning the journey back. 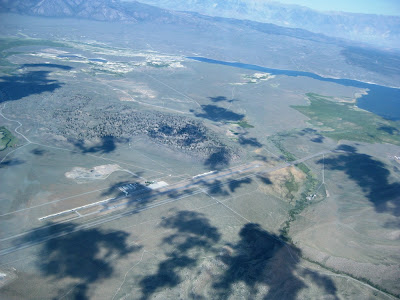 We proceeded north and filled up again at the southeast corner of Mono Lake. We put enough in the tank this time that we could make a beeline straight across the lake and head for the next gas station, which the sign said was forty miles away near Mt. Patterson. The wind on the lake was strong enough that its direction is clearly evident. 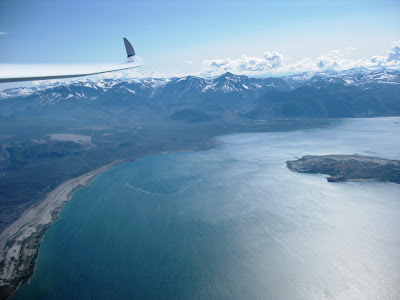 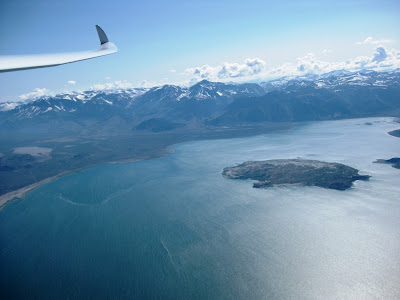 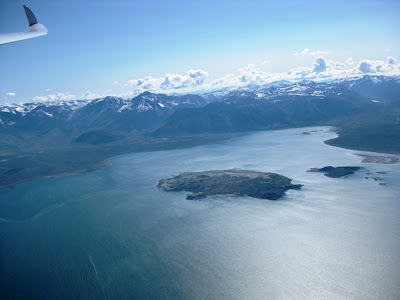 We approached the ghost town of Bodie, which I had flown over a number of times but had never taken a picture of as we were always too high.  In the first photo, Bodie is ahead of us on the right.  And in the second photo, it is near the wingtip. 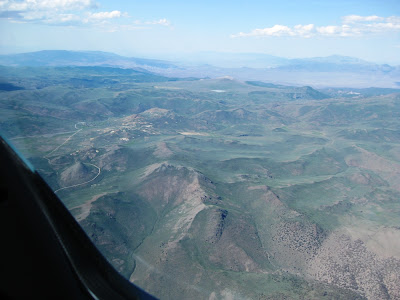 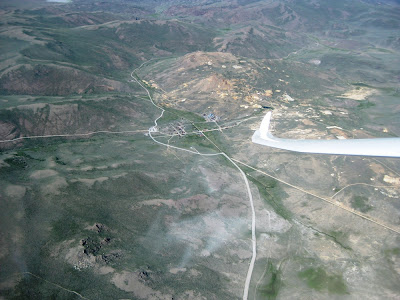 It turns out that the Mt. Patterson gas station was closed when we arrived, but fortunately we found one still open near Gimmey's Bowl just a few more miles up the road. And it had a nice clean restroom to boot! That was all the gas we needed to get back home.
Here's our flight trace from See You. 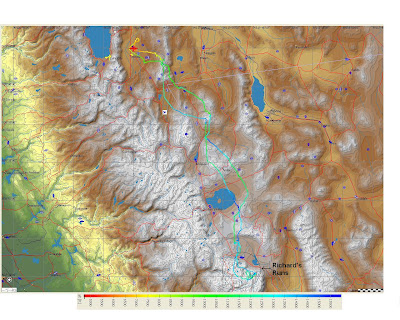 What a wonderful flight to celebrate my Dad's life! The flight was 4 hours and 20 minutes in duration and we covered about 350 miles. But the 20 minutes that were Richard's Runs were definitely the highlight of the journey!
Epiblog
There aren't enough words to tell you what a wonderful person my Dad was. He was at times my mentor, my coach, my role model, my cheerleading squad, and most of all, my friend. I will consider myself successful if I can be half the person he was in life.
We only took to the skies together once, and he seemed to really enjoy it. I look forward to many more great flights with him in the future as I know he will always be with me. 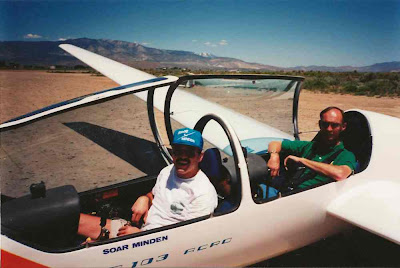